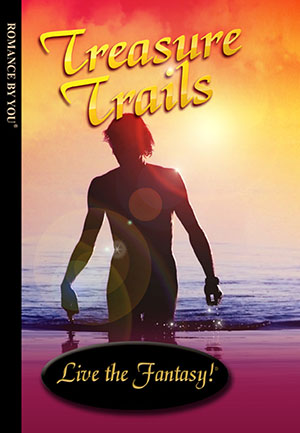 Please Wait!
Star in a reality TV series: bedlam, backstabbing, and romance, all with the cameras rolling constantly! Will you outlast the other competitors... including one who just might win your heart? Get swept away to the lush tropical island of Ste. Isabelle, where you're a contestant on the reality TV show TreasureQuest.   Read More

Our amiable, idealistic hero arrives on the island still hurting after a bad relationship. During the game, he hopes to recover his confidence while remaining straightforward and true to his ethics. He's caught off guard by our second hero: an ambitious, competitive guy who manipulates the cameras, bends the rules, and sabotages other contestants in order to win.

Soon, the ever-present TV cameras are broadcasting the bedlam and backstabbing to millions of viewers, and all the players must decide who's an ally… and who's a saboteur!

Though their tactics are incredibly different, our two heroes quickly become frontrunners in the competition. Inevitably, the fierce competition ignites sparks of desire between the strong-willed pair, while viewers watch every second of their relationship, emailing and texting their cheers and jeers... much to the delight of the snarky host/producer.

When it is revealed there's a traitor in their midst, our ethical hero must struggle against not only his fellow contestants, but his own growing feelings for the sexy stranger giving him the most trouble ... and the most excitement. But is it really love, or is it just part of a hard-hearted strategy? Can anyone be trusted when a $1 million prize is at stake? Is all fair in love and war?

Filled with adventure, humor, puzzles, passion, and romance, "Treasure Trails" will make you a star!

Remember: You co-author "Treasure Trails" by selecting the heroes, a best friend, and even include a dog or cat! "Treasure Trails" is 200 pages, professionally bound, with 27 characteristics to personalize and a customized cover. A truly unique gift that will be cherished forever. ...Read Less

"I watch Survivor and Temptation Island and I'm amazed how your book captures the excitement and the look and feel of these shows. The cameramen, tacky TV show host and the interpersonal conflicts are great!"Tom J., Issaquah, WA

"What a wonderful storyline. It was a birthday gift from my partner and what a surprise - need I say, the adventure was capped by the most romantic ending!"Chad P., Thunder Bay, ON 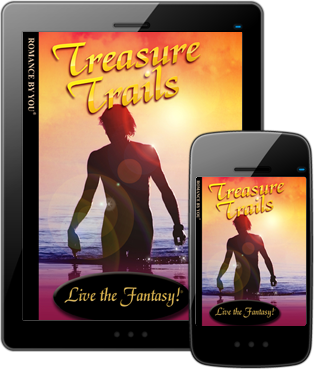 We have rated our books for sensuality and developed the Book By You "Chili Pepper" rating system to help you choose which book is best for the intended reader. Many of the romantic scenes in our books are limited, leaving more to the imagination than graphic details while still maintaining the loving tension and excitement that builds with each encounter.

Sweet romance. No specific description of love scenes - kissing and hand holding but no sex or profanity.

Romance with foreplay and sexual tension, but closed-door sex

Romance with sex scenes. Suggestive language is stepped up; more like a typical romance novel. While more romantic, there are no vivid sexual scenes or language.

The love scenes are more explicit with some sexual words and tension. Still, we leave something to the imagination and something to re-enact in your own way later!