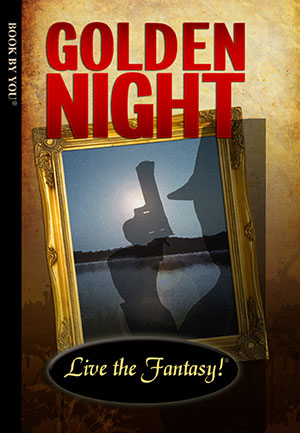 Please Wait!
A painting holds a deadly secret nearly two centuries old...and one vicious criminal will do anything to steal its precious, hidden treasure. To solve the case, an art conservator and detective team up to risk their lives on the adventure of a lifetime!   Read More

In Golden Night, a ruthless thief violently interrupts plans for an upcoming museum exhibit of local artwork. Our heroine, the museum's conservator with a keen eye for detail and a talent for trouble, suspects that one particular painting holds the key to a two-hundred-year-old mystery with potentially deadly consequences.

The police detective in charge of the investigation (our brave hero) isn't so certain; in fact, he believes it's an inside job... and his experienced, razor-sharp mind soon targets the art conservator herself as a possible suspect!

Meanwhile, the heroine digs away at the truth by inspecting the painting. Peeling away at the layers of time, she makes an astonishing discovery -- a secret of long-lost gold that the painter intended to take to his grave.

Even with this revelation, the veteran cop doesn't buy that the truth lies in the distant past ... especially when a terrifying attack nearly cuts short the heroine's own history once and for all.

Fighting back, our heroine consults with her best friend, a savvy historian, to decipher the clues; meanwhile, the hero and his fun-loving pilot buddy also fly to the rescue. All four must race to hunt down the gold and the thief -- before the dangerous thief finds them!

"I received Golden Night for my 30th birthday. What a great surprise and fun read! Can't wait for the next one!"Jeremy L., Ottawa, ON

"I gave your personalized book as a retirement gift to my boss and it was a huge hit! These are unique gifts and I'll definitely get more for my friends."Sally C., St. Helens, OR

"What a mystery! Fun and intriguing."Alec C., Portland, ME 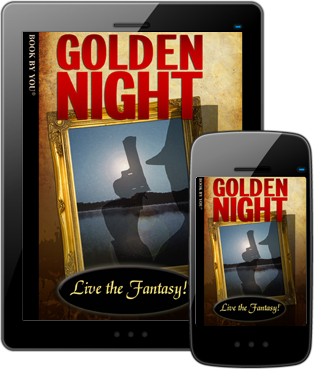