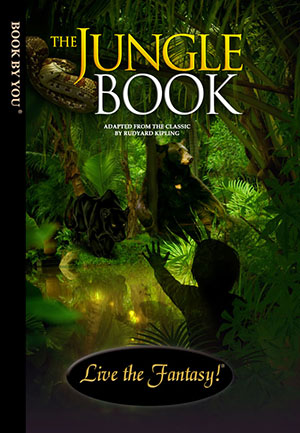 Star in the Kipling Classic

Please Wait!
Book By You makes dreams come true with your own personalized edition of Rudyard Kipling's stories from The Jungle Book and The Second Jungle Book. Step into Rudyard Kipling's world, where you'll be raised by wolves in the wild Indian jungle and hunt alongside beloved characters in these timeless tales.   Read More

You can star as Mowgli in this one of a kind role! This engaging collection follows the young Mowgli, lost in the jungle and adopted by a pack of wolves. Mowgli's incredible adventures span eight tales in which he learns the laws of the jungle from wise and tender Baloo the Bear, hunts with the sleek and dangerous panther Bagheera, escapes the sly and grasping Monkey-People with the help of Kaa the python, and grapples with the ferocious and fearsome lame tiger Shere Khan. Mowgli does it all in these enthralling tales! But the threat of man is ever-looming, and despite his wild upbringing, Mowgli is still a man-cub. Will he be allowed to stay in the jungle, or will he be banished to the village and the world of man?

Mowgli learns important lessons in beautifully crafted tales that, like those in Kipling's Just So Stories, are timeless and beloved by all. Learn how the tiger got its stripes in How Fear Came, help run a pack of mangy unwanted dholes out of the jungle in Red Dog, outsmart some cunning monkeys in Kaa's Hunting, and more!

Applause for The Jungle Book

"Reading our personalized Jungle Book has turned into a family event. It stars our oldest, but the younger kids love hearing about the wild adventures their big brother has been having in the jungle!"Chad S, Portland, OR

"My son adores this book! He has me read it to him every night. He loves seeing his name alongside the characters he's so familiar with from watching the Disney movie (on repeat, of course)."Susan A, Philadelphia, PA 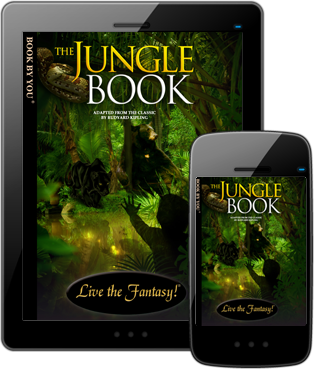