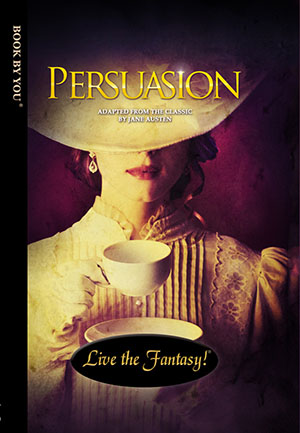 Web of Romance and Intrigue

Please Wait!
Book By You is thrilled to present Jane Austen's final novel, Persuasion. Originally published in 1818 alongside Northanger Abbey, Book By You's one-of-a-kind personalized version of this timeless tale will delight Austenophiles and book lovers the world over.   Read More

Years ago, young and impressionable Anne Elliot was persuaded by her family not to accept the marriage proposal of a kind but poor and connectionless naval officer, Frederick Wentworth. When a chance encounter reunites the two eight years later, still-unmarried Anne finds her former flame has pulled himself up by his own bootstraps and has become quite the eligible bachelor. Frederick, who has become a captain and encountered great success in the Napoleonic wars, is on the hunt for a wife -- but his pride is still bruised from Anne's rejection, and he vows to marry any appealing young woman except Anne Elliot.

The encounter with Frederick sends Anne's formerly dull life spinning. Soon she is caught up in a whirlwind of emotions and events -- jealousy over Frederick's potential matches, a trip to the coast that brings on a slew of new acquaintances, a tragic accident that takes the drama to a fever pitch -- it seems there won't be a moment of respite for Anne. Meanwhile, her calm demeanor, sympathetic nature, and quiet understanding under pressure are beginning to change Frederick's mind about marrying her.

Will the former lovers overcome the past in order to live happily together forever, or does fate have something else in mind for them? Featuring the classic Austenian twists, turns, and tangles, Persuasion weaves a web of romance, intrigue, and -- as always -- hilarious social commentary that will engross readers of any age.

"Persuasion is Austen's humor and understanding of human nature at their finest. This one strikes quite a chord."Quinn M., Memphis, TN

"Austen's beautiful prose and this touching story are made all the more moving by the inclusion of me and my fiancé. Frederick's letter to Anne has been the height of romance since the first time I read it, but reading it addressed to me brought me to tears!"Megan H., Rock Island, IL

"A must-have for any bookshelf."Sydney A., Fresno, CA 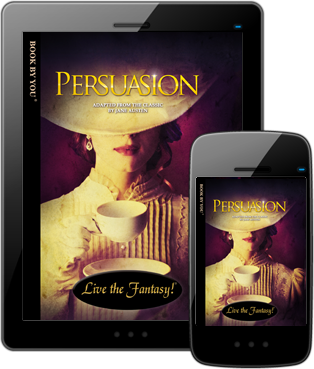