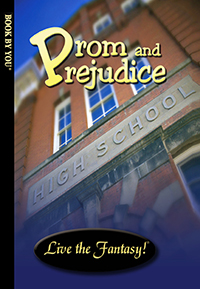 We recommend that you scan the Prom and Prejudice character questionnaire below. If you are unsure what to enter for a particular selection, click the Tips link.  After starting the questionnaire, if you need more time click Continue and your information will be saved for two weeks in your shopping cart.

Prom & Prejudice has nineteen selections to personalize. You personalize the four lead characters: the football hero, the cheerleading heroine and their two best friends. You can even include a pet. 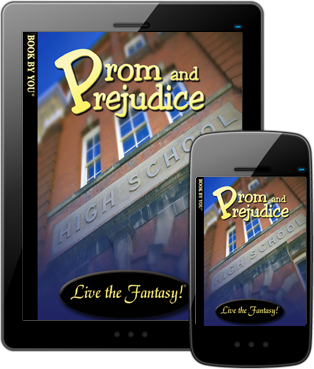 Our heroine is one of our two main characters, along with the hero. She is a smart, talented student who heads her high school cheerleading squad. Liked and respected by many within the school, our heroine has a feisty, funny rivalry with the young man who used to be her best friend -- our hero, the school's star football player

When entering the character's name, choose the commonly used first name. For instance, use Anna instead of Anastasia if she is usually called Anna. Feel free to use a nickname.

If you can't think of a heroine, pick a film or TV star such as Jennifer Lawrence, Jennifer Lopez, Scarlett Johansson or Billie Eilish! Or choose a fictional character such as Bella Swan, Katniss Everdeen or Elizabeth Bennet ... the choices are endless!

Descriptions of hair color, length and type as well as eye color are included in the text of the book, so select the basic description that best suits the person you have picked to be the main character. If you are not sure of a feature, don't worry... pick one. It's a fantasy!

Our hero is one of our two main characters, along with the heroine. He is a funny, competitive, clever, mischievous student who's the star of his school's football team. He loves practical jokes and sometimes goes a bit too far, especially when it comes to teasing his former best friend -- our heroine. His behavior gets him into trouble, but his innate sense of honor and good humor work to win back the trust he's lost.

When entering the character's name, use the commonly used version - for example, Mike for Michael. Feel free to use a nickname.

If you can't think of a hero, relax! Pick a film or TV star such as Robert Pattinson, Paul Wesley, Tom Holland, Justin Bieber, Chris Hemsworth, or Drake! Or go with a fictional character such as Edward Cullen, Dean Winchester, Damon Salvatore or Steve Rogers - the choices are endless!

The friend in the story plays a fun and indispensable role, cajoling and supporting the heroine in all the ways best friends do! At times, she provides comic relief while other times she fiercely defends her friends.

When entering the character's name, choose the commonly used first name of the person you have selected for the story. For instance, use Beth instead of Elizabeth if she is usually called Beth.

The hero's male friend in the story is an eccentric and fiercely loyal buddy, who also has a flirtatious relationship with the heroine's female friend. He is smart, even though he can be clumsy at times, and it's his determination that help saves the prom from being ruined by a devastating prank.

Choose the commonly used first name of the person you have selected for the story. For instance, use Mike instead of Michael if he's usually called Mike.

Descriptions of the friend's hair and eye color aren't used often in the story, so don't worry if you can't remember or don't know.