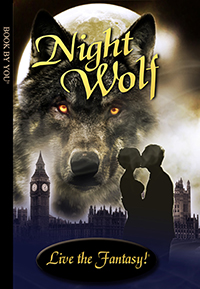 We recommend that you scan the Night Wolf character questionnaire below. If you are unsure what to enter for a particular selection, click the Tips link.  After starting the questionnaire, if you need more time click Continue and your information will be saved for two weeks in your shopping cart.

Night Wolf has twenty-seven selections to personalize. The story revolves around three main characters: the modern, impetuous and intelligent young heroine; the brilliant, sophisticated but secretly tortured hero; and the heroine's loyal yet mysterious female friend. 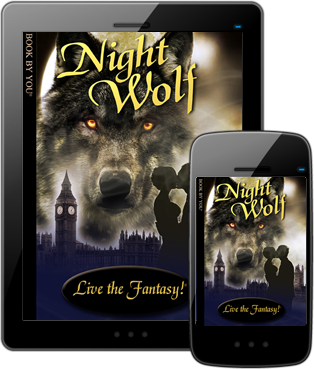 Our leading lady is a high school senior thirsting for mystery and adventure. When a book sweeps her back in time to Victorian London, she gets the chance to enter a real-life mystery ... and falls head over heels for a brilliant, dashing young detective! She tries to hide her modern ways but her feisty, independent spirit reveal her as a 21st century woman. On the hunt for a serial killer, her perseverance, passion, and intelligence bring her closer to the man she loves, but will also be tested when she begins to suspect the detective is hiding a deadly secret of his own.

When entering the character's name, use the commonly used first name; for example, Liz instead of Elizabeth if she is usually called Liz. Feel free to use a nickname.

If you can't think of a heroine, pick a film or TV star such as Jennifer Lawrence, Jennifer Lopez, Scalett Johansson or Billie Eilish! Or choose a fictional character such as Bella Swan, Katniss Everdeen or Elizabeth Bennet ... the choices are endless!

Descriptions of hair color, length and type as well as eye color are included in the text of the book, so select the basic description that best suits the person you have picked to be the main character. If you are not sure of a feature, don't worry... pick one. It's a fantasy!!

Our hero is a Victorian detective in the tradition of Sherlock Holmes: brilliant, brave, sophisticated, athletic and relentless. The toast of London despite his young age, he wants to solve every mystery put before him - and our heroine's modern ways are particularly puzzling. But he's haunted by a mystery of his own: each full moon turns him into a werewolf! Worse, he fears he might be responsible for the very crimes he's vowed to solve. He's determined to protect the heroine from his own alter ego, but can he fight the call of the wild that turns him into a vicious beast?

When entering the character's name, include the commonly used version - for example, Mike for Michael. Feel free to use a nickname.

If you can't think of a hero, pick a film or TV star such as Robert Pattinson, Paul Wesley, Tom Holland, Justin Bieber, Chris Hemsworth, or Drake! Or go with a fictional character such as Edward Cullen, Dean Winchester, Damon Salvatore or Steve Rogers - the choices are endless!

Our heroine's best friend is a smart, generous young woman with two roles to play: in the 21st century, she's a clever instigator who plans to send our heroine back in time; in the 19th century, she's the elegant owner of a boarding house who shelters our out-of-place heroine. Like any best friend, she's supportive of our heroine through the good times and the bad.

Choose the commonly used first name for the person you have selected for the story. For instance, use Beth instead of Elizabeth if she is commonly called 'Beth'.