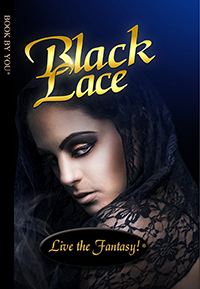 We recommend that you scan the Black Lace character questionnaire below. If you are unsure what to enter for a particular selection, click the Tips link.  After starting the questionnaire, if you need more time click Continue and your information will be saved for two weeks in your shopping cart.

Black Lace has over thirty selections to personalize. You personalize our four lead characters: the passionate, tragic, dangerous yet selfless heroine; the fearless, empathetic, resolute young hero; the heroine's more experienced, self-absorbed yet supportive succubus friend; and the hero's loyal, somewhat nerdy, smart and caring best pal, determined to save his friend's life. 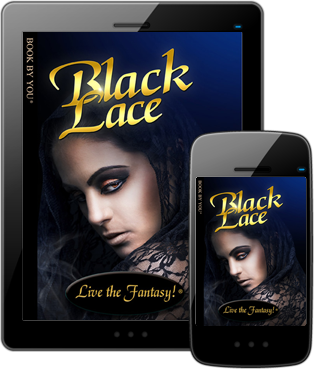 Our heroine is a life-force vampire/succubus, a dark creature who must snare and bind victims to her in order to feed off their energy... until the victim dies. Young and only recently turned into a vampire, she is mercurial and passionate, and somewhat naive - considering her victims "companions" or "friends" while getting close to them. There's an otherworldly aspect to her; she has extraordinary senses and can change from fierce anger to tremendous sorrow in a moment and, when she meets the right person, she falls in love. She mourns for the human she used to be, as well as her victims, and remains in seclusion so she isn't tempted to drain more people than necessary. Lonely and childlike at times, she's also seductive and her hold on her latest victim--our hero--is magnetic. She's as drawn to him as he is to her. Only one of them can survive their bond. Which one will make the ultimate sacrifice?

When entering the character's name, use the commonly used first name; for example, Liz instead of Elizabeth if she is usually called Liz. Feel free to use a nickname.

If you can't think of a heroine, pick a film or TV star such as Jennifer Lawrence, Jennifer Lopez, Scalett Johansson or Billie Eilish! Or choose a fictional character such as Bella Swan, Katniss Everdeen or Elizabeth Bennet ... the choices are endless!

Descriptions of hair color, length and type as well as eye color are included in the text of the book, so select the basic description that best suits the person you have picked to be the main character. If you are not sure of a feature, don't worry... pick one. It's a fantasy!

The young hero is a gifted Shadow Ward, responsible for finding and escorting lost souls to the Pool of Sorrows, where they find some peace. He has a dark sense of humor and is fearless, having once died himself (but brought back to life, which is when he became a Ward); he feels empathy for the souls who cannot rest. When he hunts for the heroine, believing her to be a lost soul, he's furious to be trapped by her tricks and believes her to be a sorceress. Soon though, his natural compassion for the heroine's plight takes over, as does his instant desire for her. Though he is trapped in her web, he develops feelings for her -- feelings he's only had once before. Reluctant to give his heart to another woman, he's conflicted by the blossoming relationship with the heroine. Eventually though, he'll have to decide whether to sacrifice himself for her, or to sacrifice her and save himself...

When entering the character's name, include the commonly used version - for example, Mike for Michael. Feel free to use a nickname.

If you can't think of a hero, pick a film or TV star such as Robert Pattinson, Paul Wesley, Tom Holland, Justin Bieber, Chris Hemsworth, or Drake! Or go with a fictional character such as Edward Cullen, Dean Winchester, Damon Salvatore or Steve Rogers - the choices are endless!

Our heroine's best friend is also a succubus, taking energy from victims. Unlike our heroine, she can attack multiple victims at a time, and tends to leave them alive. She is beautiful, elegant, and far more accustomed to this life than our heroine. She is cynical about true love and certainly doesn't approve of a romance between a vampire and a human, advising her friend to steer clear of such emotions. She can be self-absorbed and greedy, and highly sensual, but is also a loyal friend who provides advice to her dearest friend.

Choose the commonly used first name for the person you have selected. For instance, use Beth instead of Elizabeth if she is commonly called Beth.

The hero's friend is also a Shadow Ward, but is also in the service of a group of powerful vampires who seek a cure for their bloodthirsty plight. He is extremely responsible, smart, something of a research nerd, and is very cautious. He worries for his best friend's safety, warning him not to fall in love with a succubus/vampire. He and the hero mock one another but share a close friendship and are very loyal to each other.

Choose the commonly used first name of the person you have selected for the story. For instance, use Mike instead of Michael if he's usually called Mike.

Descriptions of the friend's hair and eye color aren't used often in the story, so don't worry if you can't remember or don't know.